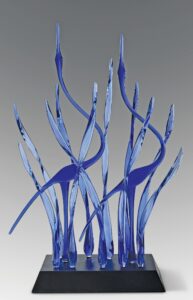 Warner Whitfield and Beatriz Kelemen’s shared interests in dance and snorkeling have inspired them to create timeless pieces of glass sculpture.

Each unique piece of their glass art suggests movement. Whitfield, who taught Latin dance, and Kelemen, who was raised in Venezuela, appreciate movement and many of their art titles come from dances, such as the Paso Doble or Tango. So too, while swimming among the colorful reefs in the Caicos Islands, they have been inspired by swaying seagrasses and soft corals.

Whitfield was introduced to glass art in 1972 while visiting Underground Atlanta and was fascinated by the glass work being done there. He met Fritz Bachman, a glassblower from Germany, and the artist took him under his wing.

“We ended up working together not full time but on and off over the next five years until he returned to Germany,” said Whitfield. “So I started seeking out wherever I could learn anything.” Workshops in several locations in Maine and in North Carolina followed. 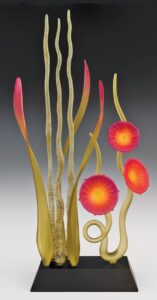 “Unlike Beatriz I don’t have all of the degrees she has, but I have the training and experience without the degrees,” he said.

Beatriz followed in the footsteps of her father who was a trained architect and had become famous for his stained glass. While she and her twin sister didn’t care for the stained glass, he introduced them to fused glass. She liked it and kept it as a hobby as she went for a master’s degree in project management in California. She stayed in the U.S. working as an architect and used her vacation time to get more experience in glass and new techniques.

In 1991 she decided to move forward full time to working with glass and started going to trade shows. “People really liked what I did and they purchased it,” she said, “I was able to develop a nice line to be able to be recognized and continue the career of glass fusing. That’s what I did until I met Warner.” 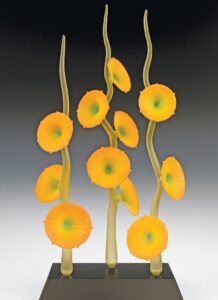 Currently they live in Ocala and participate in Southwest Florida art festivals. “I have a lot of collectors from that town,” said Warner of Naples. “They contact us all the time and order.”

Working with borosilicate glass and using one of their techniques, the Latticino technique, they begin with a cold glass rod and melt it over a flame so it becomes like taffy. Everything is basically shaped by the heat and the gravity.

“When you twist it and curve it at a certain angle you can watch the light kind of move through the piece at different times of the day,” said Warner. The finished pieces are inserted into black wooden bases so every piece in their designs is interchangeable.

To see more of their work, visit Gallery One, 765 5th Avenue South, Naples and WhitfieldDesigns.com where their upcoming festival dates are listed. 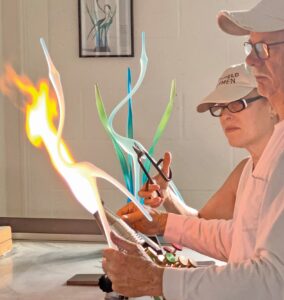 Warner Whitfield and Beatriz Kelemen creating one of their glass sculptures.