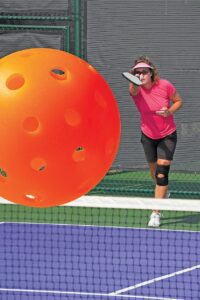 One pickleball strategy that can help you when you are playing two right-handed players, is placing the ball low towards the left foot. You can also hit it low and soft behind the right-side player’s left foot.

This is a weak spot for right-handed players, generally because players’ backhands are weaker than players’ forehand shots.

You also want to target the weaker player, and that player will usually be on the forehand side of the court, so the stronger player’s forehand is up the middle. Hitting low balls to that left foot of the right-side player also can cause both players to step towards one another, opening up the court for a passing shot.

Hitting low balls towards that left foot forces a player to back up, but when he does, often he does not back up fast enough, his paddle will now be brought back too far generating a ball that will be returned too high. When that ball comes back high, you have created a put-away shot.

Hitting the low left foot shot to the weaker player on the right side of the court can also cause some confusion. The stronger player should try to get the ball, but the middle does create problems, which you want. It is a very good shot to practice, as it really must land close to the left foot, or else the other player has a good chance at hitting a forehand up the middle. 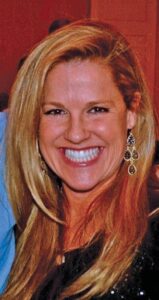 Janne Lorentzen is a pickleball professional at Bonita Bay Club. Reach her at spotlight@swspotlight.com.

When practicing this shot, remain low, and hit the ball with very soft hands.

Try not to pop your body up too soon, because that can cause the ball to pop as well. Be on your front foot, not your back foot for the same reason.

Once you have mastered that shot, you now want to mix it up and add some spin, or hit with more depth. If you see your opponents move too soon, hit away from them and then they will be scrambling. Do not be predictable in your shot selection.

Have fun! Stay safe, and hydrate.