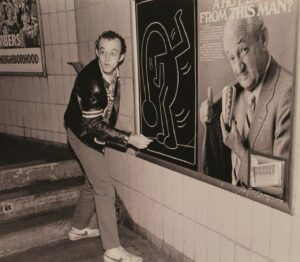 Naples Art opened a new season on November 1 with the vibrant Pop art exhibition, “Keith Haring: Radiant Vision.” The world-renowned artist and his iconography are celebrated in this collection of lithographs, silkscreens, posters, and drawings on paper, including two original chalk pieces from Haring’s prolific “subway art.”

Exhibit visitors who are old enough will easily recall what life was like in the 1980s through Haring’s bold-lined images.

Haring’s art creations raised awareness about AIDS as an epidemic and supported the ending of apartheid in South Africa. “When you look at the topics addressed in his work, you’ll find they’re still relevant today in our global health crisis and issues of social justice,” Verpoorten said.

“The exhibition reminds us that we will also get through this current pandemic,” he said. “Public awareness creates the energy for dealing with these kinds of issues.” 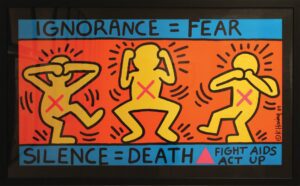 Keith Haring was born in 1958 and raised in Pennsylvania. He learned cartooning skills from his father and soon developed a strong interest in art. While attending the School of Visual Arts in New York, he discovered a thriving alternative art world in the downtown streets and subways.

In 1980, Haring found a perfect medium for reaching the wide audience he desired. In some subway stations, blank advertising panels covered with matte black paper became his “canvas” for chalk drawings. As Haring produced hundreds of them within five or six years, commuters sometimes stopped to chat when they found him at work.

Although Haring was arrested twice for creating “street art,” his works quickly gained recognition and were featured in galleries and museums. His unique blend of graffiti culture with uptown sophisticated art was a hit.

‘Crack Down,’ a poster by Keith Haring, was designed for the 1986 ‘Crackdown on Crack’ concert in New York City. Credit: Keith Haring 1986

Keith Haring died of AIDS-related complications in 1990, at the age of 31. In his brief but prolific career spanning the 1980s, his work was featured in over 100 solo and group exhibitions. Haring collaborated on projects with artists and performers as diverse as Madonna, William Burroughs, Timothy Leary, Jenny Holzer, Yoko Ono, and Andy Warhol.

Even after his work was globally renowned, Haring spent time getting to know visitors at his gallery shows. “He would sometimes do a quick drawing on the spot and sign it for someone he’d just met,” Verpoorten said. “His agents got upset about that. They thought it might deter sales of his high-priced pieces or promotional contracts, but that didn’t happen.”

In 1986, Haring opened the Pop Shop retail store in Soho, offering reasonably priced items like T-shirts, posters, toys, pins, and magnets featuring his images. He wanted to make his artwork available to as wide an audience as possible. 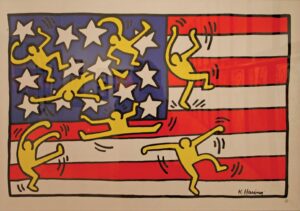 With his high regard for collaborative art-making, Haring enlisted the help of 900 children to paint a mural for the 100th anniversary of the Statue of Liberty in 1986. That same year, he produced the “Crack is Wack” mural that is still a landmark along FDR Drive in New York.

Naples Art is hosting a group of students through the Immokalee Foundation to view the Keith Haring exhibition and then make murals or posters together. They will take their creations back to Immokalee for displaying in the community. This event brings the spirit of Haring’s work to a broader segment of Southwest Florida residents and affirms his statement that “art is for everyone.”

“We recognize how much Keith Haring valued collaboration, as evidenced by how often he engaged in it,” Verpoorten said.

“Nothing gave him greater joy than seeing people side by side, working on murals,” he said. “We appreciate the communal aspect of that.”

Haring’s legacy as a humanitarian lives on through his iconic creations and the foundation bearing his name. Established in 1989, the Keith Haring Foundation works for child welfare and promotes education and research surrounding AIDS.

“Keith Haring: Radiant Vision” continues through February 6 at Naples Art, 585 Park St. Admission is $15 for non-members, $10 for members and students with valid ID, and free for ages 18 and under. Tickets are available at the door or online.