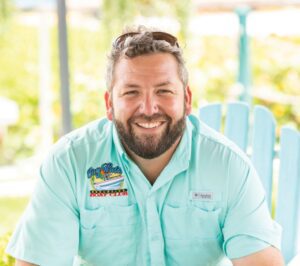 Hey! I’m Adam Botana, your state Representative for district 76. Our district goes from Bonita Beach to Boca Grande, span­ning all of coastal Lee County, The City of Bonita Springs and Village of Estero, and includes San Carlos Park, Iona, and Pine Island.

You may be wondering how I got involved in politics. My family and I started Bay Water Boat Club & Rentals in 2004 with just a couple of rental boats; now, we have over 500 members and over 70 boats. In 2017, a member of our boat club came to me and asked if I would be interested in accepting an appointed position from Gov. Rick Scott. This club member just so happened to be the father of Gov. Scott’s chief of staff. I replied the same way I always do – “I’m just the Head Boat Washer at Bay Water.” All quips aside, I saw this as a great opportunity to do more for my community so I figured “Why not?”

I was appointed to the Boating Advisory Council, run by the Florida Fish and Wildlife Commission Board. We met twice a year and discussed everything surrounding boating in Florida. As many of you remember, in 2018 water quality plummeted in Southwest Florida with blue-green algal blooms and red tide. A few people came to me and suggested I go to Tallahassee and lobby for water quality. I had never been and welcomed the opportunity.

Our group from the boating industry made the trip to Tallahassee, which is not easy to do – you can catch a connec­tion in Atlanta, drive to Miami to get a direct flight, or make a six-hour drive. Our mission: to talk about water quality with state representatives and state senators. I was surprised by what I saw. There is a lot of good, but there is also some bad. On the plane ride home, I looked up on my phone who my state repre­sentative was. I was surprised to find out that he had termed out. I thought to myself, “I can do this!”

I came home and began brainstorming with my parents and friends. They said, “We thought you’d be mayor of Bonita Springs.” I said, “Let’s do one better: State representative.” Two other candidates were already running in the August 2019 primary election. My team and I buckled down and got ready the old-fashioned way: We raised the money, and I personally knocked on 10,237 doors. One opponent dropped out early, and I beat the other by nearly 20 points on election night!

Having just finished my two-year freshman term, I’ve learned so much. Relationships are key, a lot of legislation happens after 5 o’clock, you need to have friends on both sides of the aisle, always work hard and push where you can, and know your audience!

One thing that has become the most apparent is that the media tends to sensationalize the relationship between Republicans and Democrats. Firsthand experience shows, it’s not that bad. There are 120 state representatives in the Florida House: 78 Republicans and 42 Democrats. Nearly 250 bills got passed on the House floor this past session. How many would you imagine were entirely bi-partisan? Nearly 70%, or around 175 bills! When you give a margin of three “nay” votes or fewer, for the 20% of bills. But at the end of the day, we are all there with the best interest of Floridians in our hearts.

We live in a great state, and we live in the best part of this great state! Over the past two years, we brought back over $18 million in appropriations for water quality and infrastructure. We were able to pass bills for boating safety and bills for water quality. One bill that was four years in the making was a HB 897 / SB 1260 which will help special hospital districts stay competi­tive in this increasingly competi­tive market. This will apply to our local Lee Health, which employs nearly 14,000 people from our community.